Crucified Hz. Jesus entrusts the Virgin Mary to his favourite young apostle St. John. From Jerusalem to the Virgin Mary and Ephesus (Selcuk), St. John lives and dies here. A mausoleum and St Johns Basilica are built in his memory at the place where he died. Later, he had it built-in memory of the famous Byzantine emperor Justinian and his wife Theodora Finans, which was a great project

History of the Basilica of St John

John lived and died here. He wrote the Bible here. Known to have come to Ephesus in 37-38, St. John tried to spread the Christian faith in Ephesus. st. John left after staying in Ephesus for a while. In 67 BC St. Beginning to preach the Gospel with Pertus, St. John was tried to be killed twice by the emperor of the time, Domitianus, and he miraculously survived both of them.
Exiled to Patmos Island in 81, St. John returned to Ephesus in 95. Having spent his last years on Ayasuluk Hill next to the Ayasuluk castle in Ephesus, St. It is here that John wrote the Bible and the letters bearing his name. He died here at the age of about 100 and was buried on Ayasuluk Hill according to his will.

When Christianity began to spread 300 years later, a Martyrion (Mausoleum) was built over his grave. Fifty years later (350 years ago) this mausoleum was enclosed in a wooden-roofed basilica but became unusable due to earthquakes in the early 6th century. Between 527-565, a new church with a cross-planned dome was built by Emperor Justinianus and his wife Theodora instead of this basilica. After the people of Ephesus completely moved to Ayasuluk in the 7th century, St. Jean Church(basilica) has been accepted as a pilgrimage church.
Considered an important pilgrimage center for the Orthodox community since then, St. st. John’s Church is celebrated every year on May 8 (All Saints’ Day) according to the Christian faith. Rituals are performed in the spiritual presence of John…

Photos from the Basilica 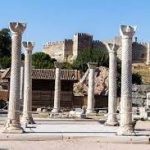 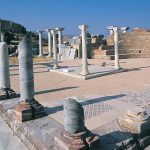 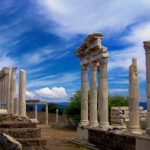 St. John’s Church Located in the Isabey district of Selcuk, the church is just below the Ayasuluk Castle. Transportation is very easy. It can be reached on foot from both the center of Selcuk and the Ephesus Museum. It is open to visitors from 17.00 in the winter period to 19.00 in the summer period.